My name is Ken Pokalsky and I am Vice President of The Business Council of New York State, Inc. We are New York’s largest statewide employer association, representing 2,200 private sector employers across New York, in all major business sectors.

As always, we appreciate this opportunity to address members of the Senate Finance and Assembly Ways and Means Committee on the Executive Budget.

While New York State’s economy overall is doing well, with an all-time high number of private sector jobs at the end of 2019, and overall job growth exceeding national levels, much of the growth has occurred in and near New York City. As shown in Chart 1, “upstate” has seen private sector job growth, since 2008 pre-recession levels, at a rate about one-seventh of that enjoyed in New York City (3.4% versus 24.4%). The suburban counties to the north of the city, and Long Island, also had significantly greater job growth than upstate, although well below New York City’s levels, and slightly below the national job growth rate as well. Further, even though New York State’s cumulative post-recession job growth is still greater than the nation’s, the U.S. private sector job growth rate has exceeded New York’s in each of the past five year. 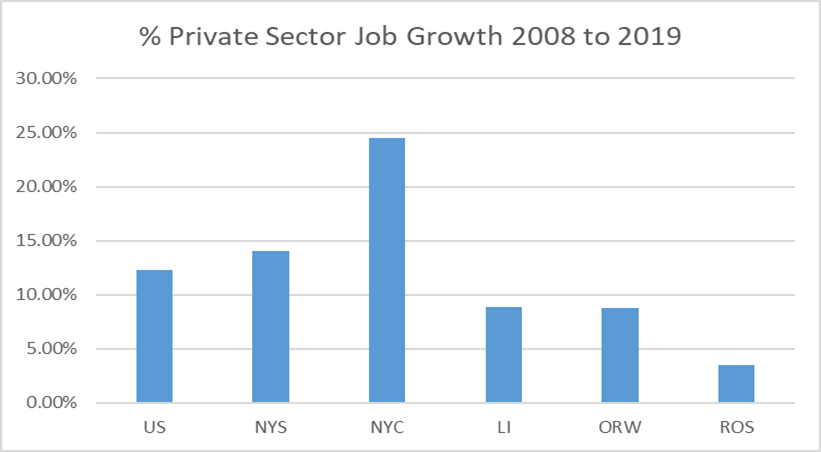 Low – even “historic low” – unemployment rates mask the underlying economic reality in many parts of upstate New York. In several upstate counties, low unemployment rates are a function of a declining workforce, rather than robust job growth, as their job growth levels remains sluggish, or even negative.

Of course, there are significant regional differences across upstate as well, as shown in Chart 2. Several upstate areas, including the Capital Region and Tomkins county, have done well. However, at the end of 2019, several other Upstate labor markets – Binghamton, Elmira, Glens Falls, Utica/Rome, Watertown – are still at or below their 2008 pre-recession job levels, and the rural counties that fall outside of these urban labor markets collectively are below 2008 job levels as well. Other than the Capital Region, the major upstate urban areas have growth rates less than half the national average. 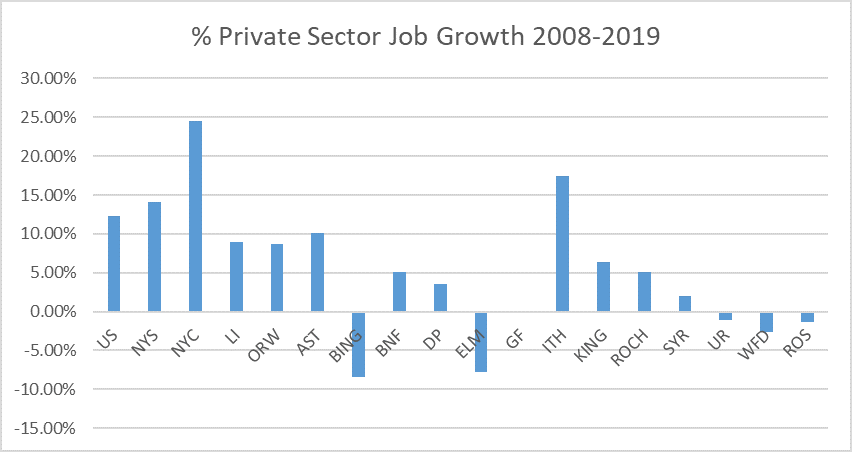 We urge you to consider these trends as you review legislation that may impact individual businesses or the state’s overall business climate. The Business Council provides support for the Siena Research Institute’s annual survey of Upstate Business CEOs, and its recently released 2020 survey shows that upstate business leaders are increasingly concerned about the state’s economic competitiveness, and their own ability to survive let alone continue to invest and grown. And, importantly, they point to state-imposed “headwinds” – including labor law mandates and other regulatory requirements and state-imposed costs – as adding to their challenges.

Against this backdrop of recent economic trends across New York State, we would like to address several of the most significant business and business climate issues presented in the FY 2021 Executive Budget.

The Business Council has supported Governor Cuomo’s overall approach to fiscal management, which is reflected in relatively low year-to-year growth in state spending. This spending restraint has allowed for both middle class personal income tax reductions and the reform and reduction of some business taxes. We also applaud your recent permanent extension of the real property tax cap, which has saved taxpayers overall an estimated $38 billion since its enactment, including as much as 20 percent of that for business taxpayers. We also appreciate legislation approved at the end of the 2019 session to decouple from federal TCJA provisions that would have resulted in unintended tax increases on business. The legislature also approved important personal income and business tax decoupling legislation in 2018.

Small Business Tax Reform – We welcome the Executive Budget inclusion of small business tax reform, although we are concerned with its limited scope, especially for non-incorporated businesses whose owners pay tax on business income under the personal income tax (PIT). In the budget proposal, the PIT component of this tax reform is limited to sole proprietors. In contrast, in the FY 2017 Executive Budget, a similar tax reform was proposed for all small businesses regardless of their legal structure, including partnerships, limited liability companies, sub-S corporations as well
as sole proprietorships. That year, the Senate and Assembly also both endorsed small business tax packages similar but not identical to the Governor’s proposal in their respective one-house budget resolutions. Unfortunately, a compromise measure was not included in the final budget agreement. We recommend that the legislature consider broader small business tax relief, as proposed in 2016. Given its past bipartisan support, a similar small business tax reform legislation should be achievable as part of the FY 2021 state budget.

Small Manufacturers Tax Relief – The Senate and Assembly should also consider incorporating into the final budget another pending small business-oriented tax provisions, S.4671 (Kaplan) / A.636 (Stirpe), that would provide a state personal income tax exemption for income earned by a “qualified pass-through manufacture.” This legislation completes Governor Cuomo’s 2014 initiative to cut business income taxes for New York manufacturers, which reduced the “entire net income” based corporate franchise tax rate for manufacturers to zero. This legislation has the same effect for manufacturers organized as partnerships, LLCs, s-corporations or sole proprietorship – commonly referred to as “pass-through entities” as their income is “passed through” to their owners and taxed under the personal income tax.

This legislation will reduce state-imposed costs on smaller manufacturing firms across New York State. Its direct cost to the state is estimated at less than $50 million annually. However, a recent study conducted by The Beacon Hill Institute estimated that "the elimination of the PIT for pass-through manufacturers would increase private sector jobs by 3,455 the first full-year and by 4,850 in 2022. The increase in economic activity sparked by extending the zero-percent tax rate to income from pass-through manufacturers would mitigate the loss of revenue to New York State and boost local tax collections.

In general, the state had projected limited additional revenues from these provisions, so amendments adopted in the 2020 session should not adversely impact the state’s long-term financial plans. However, these conformity issues will be an economic competitiveness issue for New York and other states. Given the Administration and legislature’s focus on avoiding unintended tax increases due to TCJA, these issues should also be addressed during the 2020 budget process.

Expansion of Prevailing Wage – We remain strongly opposed to legislation to extend the public works’ prevailing wage mandate to private sector projects receiving state and/or local economic development assistances. These measures are simply contrary to the state’s economic development objectives, adding significant additional costs and regulatory obligations to projects recognized as needing assistance to move forward. This concern is especially true in upstate where many counties have seen flat economic growth. Driving up project labor costs will hamper a wide range of investment and job creation projects, including those sponsored by for-profit businesses as well as non-profit service providers on which our communities rely. Comparing total mandated prevailing wages and supplemental benefits to actual average wages for specific construction occupations in upstate labor regions shows differentials rarely under forty percent, and as high as 100 percent or more.

We recognize that the Executive Budget proposal (S.7508 / A.9508, Part FFF) is more limited than other pending legislation, in several significant ways. It would impose the prevailing wage mandate only on those projects valued at $5 million or more where public assistance is at least 30 percent of project costs. It exempts several specific incentive programs, including those for brownfields, historic preservation, downtown revitalization, affordable housing, and others. It also exempts incentive programs that are primarily intended to support non-construction expenditures, as well as those whose value cannot be calculated at the onset of the project. These final exemptions include, but are not limited to, incentive programs based on job creation.

In addition to our threshold concerns about any prevailing wage expansion into private sector projects, we oppose other provisions of the Executive Budget proposal. It would subject these projects to the state’s Article 15-A MWBE requirements, which were expanded and extended in 2019 without necessary reforms, resulting in the imposition of MWBE participation targets that are unrealistic for some labor regions. It also proposes the creation of a subsidy board which would have expansive, and we believe inappropriate, authority to revise the “covered project” applicability thresholds without having to resort to legislative changes or formal rulemaking.

Mandatory Sick Leave – Based on the broad-based input from our members, we oppose employee leave mandates. Studies show that nearly three out of every four employers in the U.S. already provide paid sick leave to their employees. Employers design and administer these sick leave plans and other employee benefit offerings to meet the unique needs of their employees and customers. Broad legislative mandates rarely meet the needs of the employer or the employee, and in addition to direct costs, also impose challenging administrative burden on employers as well, especially small business. Legislators recognize these inefficiencies and routinely exclude employees of government agencies and certain collective bargaining agreements from such proposals.

We appreciate that the Executive Budget provides an alternative mandate for the state’s smallest employers, requiring unpaid, but job projected, leave for employees of less than five. However, the Executive Budget proposal provides little detail on the key definitions and administrative requirements of this leave mandate. In contrast, New York City’s paid leave mandate, effective in April 2014, imposes an expansive definition of allowable use of leave, and detailed administrative mandates on employers. In fact, data provided by the NYC Division of Consumer Affairs for the for the first three years of their program’s application show that most complaints are for alleged administrative violations, such as notice requirements. This evidence suggests that the administrative requirements of the City’s law are too complex for small businesses that typically do not have a dedicated human resource professional.

Faced with low unemployment and severe workforce shortages, employers of all sizes will be faced with staffing difficulties and administrative burdens if such a law were imposed on the entire state. This one-size fits all approach will continue to increase the cost of doing business in New York State putting continued job growth at risk.

The Executive Budget contains numerous other provisions of interest or concern to our diverse membership. We will address several of the more significant ones here.

Thank you again for the opportunity to testify today, and I welcome any questions or comments you have on these or other tax policy issues.