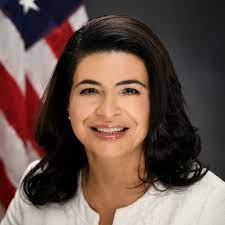 Senator Anna Kaplan (D-North Hills) is a former child refugee who has devoted her life to public service as a way of giving back to the country that has given her so much. Now serving in her second term as a New York State Senator representing the 7th Senate District, including the Northwest portion of Nassau County, Anna is fighting hard for Long Island and delivering results for our community on important issues like funding our schools, middle class tax relief, women’s rights, and keeping our communities safe from gun violence and hate crimes. As Chair of the Senate Committee on Commerce, Economic Development, and Small Business, Senator Kaplan has been a leading voice and a strong advocate standing up for New York’s small business community.

Anna Kaplan was born Anna Monahemi in Tabriz, Iran to a Jewish family. When the Islamic Revolution swept the country, Anna's parents made the difficult decision to send her on her own to the United States for safety. She arrived in Brooklyn as part of an international effort to save Iran's Jewish children and was sent to live with a foster family in Chicago, where she learned to speak English (her fourth language, having been raised speaking Aramaic and Farsi at home, and learning Hebrew) and completed high school. Eventually, Anna was granted political asylum by the United States government.

After her family was finally reunited, they moved to Queens, New York, where Anna graduated from Yeshiva University Stern College for Women, and then Benjamin N. Cardozo School of Law.

Anna settled in Great Neck, New York where she and her husband raised two daughters, and she felt a strong desire to give back to the country that had opened its arms to her as a child in need. After years volunteering at her daughters’ public schools and in her community, she decided to run for the Great Neck Library Board, where she served a four-year term. During that time, she was appointed to the Town of North Hempstead Board of Zoning Appeals. In 2011, Anna was elected Town of North Hempstead Councilwoman for the Fourth District, where she passed groundbreaking legislation such as a town-wide ban on gender identity discrimination and worked across party lines to help the town achieve an AAA bond rating for the first time in its history. She also advocated for, and helped secure more affordable housing for district seniors, and rehabilitated numerous parks within the district.

Anna first ran for State Senate in 2018, calling for the passage of the Reproductive Health Act, sensible gun safety legislation, and increased economic development in Nassau County. Her election victory made her the first political refugee and the first Iranian-American elected to the New York State Senate.

In her first term as State Senator, Anna brought back record-breaking funding for local public schools in Nassau County, passed a permanent cap on property taxes, helped pass landmark legislation protecting the rights of women, LGBTQ+ New Yorkers, and voters, and passed some of the nation’s strongest protections against senseless gun violence. During the COVID-19 pandemic, Senator Kaplan provided steady leadership to the community, distributing daily COVID-19 community updates, chairing the first virtual public hearing in the history of the State Legislature, and passing new laws that would protect our community during our darkest days.

Following her re-election to a second term in 2020, Anna has continued the fight for public schools, delivering another record-setting increase in funding (20.2%) to local public schools that will address long-standing educational disparities and decrease the tax burden on Long Island taxpayers. She has also continued to fight for common-sense gun safety legislation, introducing and passing the nation’s toughest ban on dangerous, untraceable ghost guns and homemade DIY assault rifles. Following the explosion of hatred and bias that has swept the country during the pandemic, Anna has been outspoken about the need to combat the crisis through education, awareness, and tougher hate crime laws, and she has introduced and passed several measures that will address these problems in our community head-on.