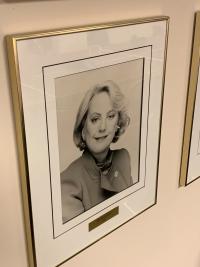 The Corning Award recipient photo of Muriel Siebert hangs in the offices of The Business Council of New York State Inc.

Muriel Siebert is often described as a pioneer for women in the financial world.  One of the most notable achievements of her career was becoming the first woman to own a seat on the New York Stock Exchange.

Muriel was the founder and President of Siebert Financial Corp, a discount brokerage holding company. The company was prosperous during the entire time she played an active role and continues to be a success today, seven years after her death.

Described on the website of the company she started as “The first woman of finance”, Muriel’s far reaching accolades, accomplishments and generosity are describe in full detail.

One mention is of her time with The Business Council of New York State. Muriel served as a board member and received the associations top prestigious Corning Award for Excellence in 1993. At one point in The Business Council’s history, “Mickie”, was the longest continuously serving member of the Board of Directors.

Her involvement with The Business Council last several decades where she met with, interacted with and touched many members including current Chairman Eric Mower.
“Muriel Siebert combines the essentials of high intelligence, compelling personality, good character and wisdom thru experience,” said Mr. Mower. “That’s a powerful profile for success in business or any other calling.”

A full bio of Muriel Siebert can be found on her company's web page, including background on her foundation which is still going strong.

"Through the Muriel F. Siebert Foundation, Ms. Siebert developed the "Siebert Personal Finance Program: Taking Control of Your Financial Future," a financial literacy program which has improved the lives of innumerable middle and high school students and adults by teaching them essential financial skills. In keeping with her personal vision, Ms. Siebert worked tirelessly to promote financial literacy among our nation's citizens", the website reads.