Over 120 golfers took to the Leatherstocking Golf Course at the Otesaga Resort in Cooperstown for the 13th annual Business Council Member Golf Classic. The sold-out event featured an 18 hole Captain and Crew format tournament, with the top team scoring a -13 under par 59. The group consisted of Gregory Corso, Ray Kinley, Andrew Kinley, and Richard Amadon.

Other contest winners included Closet to the Pin recipients Bob Crandall and Benita Zahn. The Longest Drive recipients were Patrick Nichols and Laura Petrovic. Duncan MacKenzie received the award for Closest to the Pin with a tee shot that stopped just over four and a half feet from the cup on hole 17. Mr. MacKenzie qualified for and took a shot at a putt from 60 feet for a chance to win $5,000.

The event featured a special guest in former New York Met and New York Yankee pitcher Dwight “Doc” Gooden. Doc took questions and pictures with golfers throughout the course. After dinner, a dessert reception was held at the National Baseball Hall of Fame, where a more formal question and answer session was held with the former CY Young and World Series winner.

The Business Council appreciates all the support we received from our sponsors who helped make the event memorable. 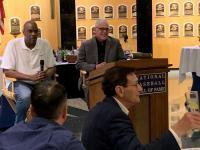