Remarkably, it exempts projects in New York City from any new statutory wage mandates.  Instead, it imposes new wage mandates on all of upstate New York, including many areas that – as shown below - are still struggling to recover from the national recession.  These areas rely on state and local incentive programs to make new capital investments and job creation projects economically viable.  This legislation reduced the value of state incentives, by tying them to significant, above-market wage and benefit mandates.  The result will be fewer projects in many parts of the state, and fewer economic opportunities for New York residents. 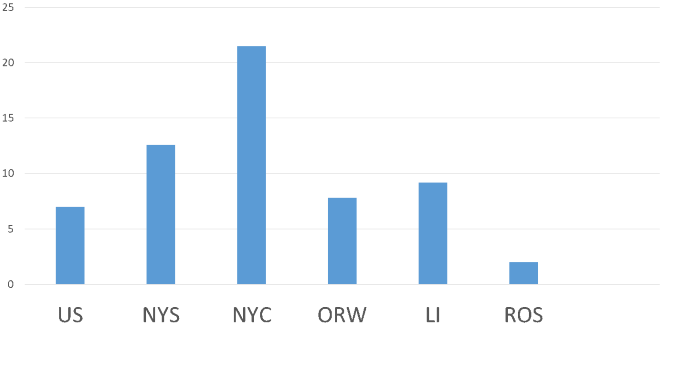 The bill also includes several open-ended provisions, meaning that its scope could be expanded well beyond expectation.  For example, it applies to incentive packages offered by “public entities,” defined as including, but not limited to local development corporations, industrial development agencies, and other entities organized under the public authorities law.  It also defines “construction” as including – but again, not limited to -- demolition, repair, installation, renovations, project design and several other categories of activities.  It is unclear to what extent or by what mechanism these definitions would be expanded.

Specifically, this bill would broadly apply to most construction projects receiving any amount of state funding including LDC’s and IDA’s. If the total level of funding from government sources reaches 30% the entire project is subject to prevailing wage mandates. This level – no matter how it is aggregated - then makes the project subject to prevailing wage and holds the owner or developer responsible under penalty of law for certifying this figure.  Further, the bill also places into law the yet to be determined new State MWBE standards under which contractors who fail to comply, or receives waivers, face possible debarment. This is further complication by the possible inclusion of “aspirational” goals being considered under MWBE renewal as well as provisions within Executive Order 192 specifically stating that MWBE violations will result in being held non-responsive and potentially non-responsible and debarred.

While the bill specifically carves out New York City, the remainder of the State is subject to this new imposition of prevailing wage. It should be noted that the bill picks winners and losers by explicitly carving our certain segments such as certain renewable energy and housing projects BUT leaving other areas subject to the new mandate. Thus it chooses – in law – classes that are deemed exempt from this mandate but not others – as if one form of building is more deserving than others in regards to higher costs. The same scenario is evidenced in the area of project labor agreements (PLA). If a project enters in to a PLA, it is thus exempted from this mandate – thus showing that one of the ultimate goals of this legislation is actually to raise the cost of all projects to the level of prevailing wage.

There have been numerous versions of this bill over the past few weeks, with negotiations for exemptions or levels of government aid, all begging the question: what problem are we actually trying to solve with this mandate. Upstate and rural New York State is in serious economic turmoil. Creating a new mandate for prevailing wage ADDS costs to projects thus risking their very existence. Business and economic development interests were not asked for their input thus answering the question. The bill is not needed.

For these and other reasons, The Business Council strongly recommends against approval of this or any other prevailing wage expansion bill.